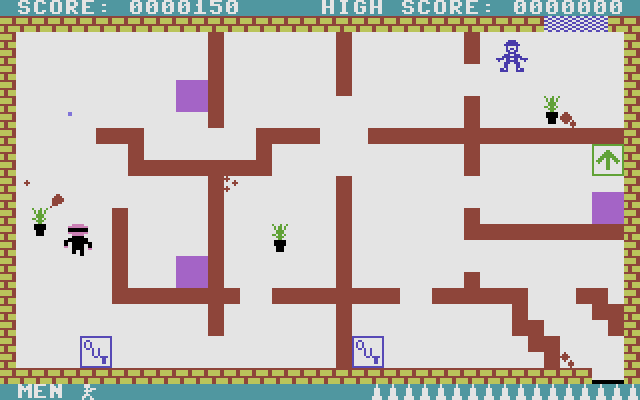 One of the better known games is „Oils Well“ from 1983.
Also known by younger generations, this game addicts also girls.

The player steers an oil driller, with which oildrops are collected in an underground maze. Enemies passing by, that must be avoided. To pull the driller back in its overground housing, the firebutton must be pressed as long as needed. The drillhead looks like a pacman and can eat some of the enemies. But the sometimes appearing color-flashing drop must be avoided, as it forces the driller completely back to the housing.

There isn’t any graphical richness but the gameplay is somehow addictive. In the end, only your mother will be annoyed by the simple sounds, that gets her on her nerves after some hours of playing. And believe me: You’ll play it that long!
 Oils Well start screen

A game to play with one joystick. You are steering a helicopter. Your aim is to have enough fuel to explore the area. Enemies shooting at your helicopter. Entrances have to be found. The Navatron helps to find things.

Even the kids of today find this game addictive and funny. The game is 32 years old. It was one of the very first games ever for the 32 years old homecomputer C64 from Commodore. The technical score is awesome for this prehistoric gem.

Get some more information at Lemon 64 or C64-Wiki.de – The german wikipedia for C64-related stuff
or read another article on this site of course!